I’m in the mood for psychological thrillers and I think those three books will definitely fulfill that craving. Is that weird to say “craving” when it comes to psychological thrillers? Hmmm. I might either read or listen to them. If you’d like to read them, at the time of this post, both WHITE SMOKE and LOCAL WOMAN MISSING are on sale for $2.99… THE REPLACEMENT WIFE came out on Tuesday. 🙂

Oh and if you’re thinking about trying Audible to listen to them, you can click here be aware not all titles are in the Plus catalogue – the Chemical Engineer and I figured that out after signing up – but you do get one credit or two credits as well which is cheaper with the membership than without). You can, also, of course get the audiobooks from your library! Many libraries have an audiobook service.

In this smart and chilling thriller, master of suspense Mary Kubica takes domestic secrets to a whole new level, showing that some people will stop at nothing to keep the truth buried.

Shelby Tebow is the first to go missing. Not long after, Meredith Dickey and her six-year-old daughter, Delilah, vanish just blocks away from where Shelby was last seen, striking fear into their once-peaceful community. Are these incidents connected? After an elusive search that yields more questions than answers, the case eventually goes cold.

Now, eleven years later, Delilah shockingly returns. Everyone wants to know what happened to her, but no one is prepared for what they’ll find…

The Haunting of Hill House meets Get Out in this chilling YA psychological thriller and modern take on the classic haunted house story from New York Times bestselling author Tiffany D. Jackson!

Marigold is running from ghosts. The phantoms of her old life keep haunting her, but a move with her newly blended family from their small California beach town to the embattled Midwestern city of Cedarville might be the fresh start she needs. Her mom has accepted a new job with the Sterling Foundation that comes with a free house, one that Mari now has to share with her bratty ten-year-old stepsister, Piper.

The renovated picture-perfect home on Maple Street, sitting between dilapidated houses, surrounded by wary neighbors has its . . . secrets. That’s only half the problem: household items vanish, doors open on their own, lights turn off, shadows walk past rooms, voices can be heard in the walls, and there’s a foul smell seeping through the vents only Mari seems to notice. Worse: Piper keeps talking about a friend who wants Mari gone.

But “running from ghosts” is just a metaphor, right?

As the house closes in, Mari learns that the danger isn’t limited to Maple Street. Cedarville has its secrets, too. And secrets always find their way through the cracks.

The #1 International bestselling author of Pretty Little Wife returns with another thrilling domestic suspense novel that asks, how many wives and girlfriends need to disappear before your family notices?

Elisa Wright is a mom and wife, living a nice, quiet life in a nice, quiet town. She’s also convinced her brother-in-law is a murderer. Josh has one dead wife and one missing fiancée, and though he grieved for them he starts dating someone new. Elisa fears for that woman’s safety, and she desperately wants to know what happened to her friend, Josh’s missing fiancée.

Searching for clues means investigating her own family. And she doesn’t like what she finds. A laptop filled with incriminating information. Other women.

But when Elisa becomes friends with Josh’s new girlfriend and starts to question things she thinks are true, Elisa wonders if the memories of a horrible incident a year ago have finally pushed her over the edge and Josh is really innocent. With so much at stake, Elisa fights off panic attacks and a strange illness. Is it a breakdown or something more? The race is on to get to the truth before another disappearance because there’s a killer in the family…or is there?

START READING ON YOUR KINDLE NOW…

What is next on your TBR/To listen pile?

There are a lot of sites listing Black Friday deals for writers such as Kindlepreneur Black Friday Deals For Writers 2022. The list below is made up of three Black Friday Deals I’m either going to use or am thinking about using. One Stop For Writers (40% for 6 month plan with BF2022): I’ve been using One Stop Writers for more than a year, I think, and it has helped me so much. I don’t use all the features (yet) but I always turn to it when I’m revising. The emotion thesaurus, emotions amplifier, colors and patterns and so much more have been so so helpful to me. I have also used The Character Builder to help me craft Alessandro. So, if you’ve enjoyed #SweetsForLove and the grumpy yet charming bodyguard, part of his characteristics came from using One Stop For Writers. Inkers Con 2021 on Demand (currently 50% off): I really learned a lot during the 2022 Mini-Con (it had four classes, including one with Becca Syme and another on budgeting which has helped me making profits this year – so yay!). There are 27 presentations in Inkers Con and so many I’d like to listen to from the 2021 Inkers Con. 2021 Inkers Con classes on sale for HALF OFF this weekend only (ends Monday at midnight ET). The normal price is $245 but use coupon code HALF21 and pay only $122.50 (or break it into two payments). Access is for 6 years with 100% money-back guarantee. ProWritingAid: : ProWritingAid is a grammar checker, style editor, proofreader, and writing coach all in one. I’ve been using ProWritingAid since August 2022. And I personally like it more than Grammarly. The one thing holding me back from the lifetime deal is that my current yearly subscription is ending in August 2023 and I don’t get a pro-rated discount for the other months… so I might wait until then to see if they have another discount. Or I’ll wait until next November. Buuuuut if you’re currently looking to use ProWritingAid, they’re currently running a 50% off for selected plans. Okay, I know I said three … but here’s another one… 100 photo/vector downloads from Depositphotos (lifetime) for $39 – it’s great for promo or covers… I won’t be using – but only because I use Canva Pro and still have pictures available on Depositphotos from a past deal. — Send in a voice message: https://anchor.fm/elodie-nowodazkij/message Support this podcast: https://anchor.fm/elodie-nowodazkij/support 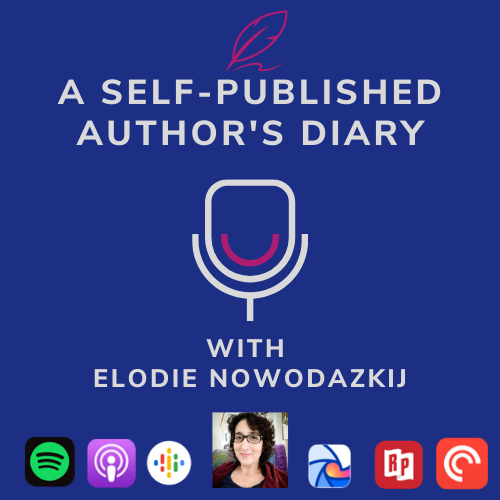