The day is here. I woke up this morning singing “It’s release day”…I’m super nervous about Love In B Minor being out in the world. I want to hug my story one more time. I want to tell my characters they’ll be okay. I want to reassure my book that it’s going to be a crazy ride but a fun one.

And then yesterday, I got this picture by Books & Tea and this made me oh so happy. Paris plays such a big part in this story. 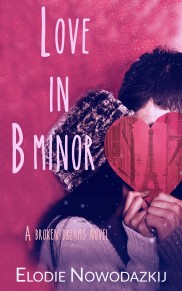 No promises. No fake tomorrows. That was the plan.

New city. New life. At least, that’s what nineteen-year-old Jen Harrison believes. On the surface, she’s living her dream: dancing in a prestigious dance company in Paris. But her sister’s death and the mistakes she’s tried to bury haunt her. She’s become a pro at hiding who she truly is, and she definitely doesn’t want a guy to derail her, but a one night-stand she can do. Nothing more. She definitely doesn’t plan to see the sexy stranger who made her laugh for the first time in years ever again.

Love in B Minor is the third standalone novel in Elodie Nowodazkij’s Broken Dreams series.

You could win a $25 Amazon Gift Card, signed paperback copies of A Summer Like No Other & Always Second Best or an e-copy of One Dream Only & One Two Three.

THANK YOU SO SO MUCH ❤

2 thoughts on “LOVE IN B MINOR is out in the world! (and giveaway!)”