I just realized I totally forgot to blog about my upcoming novel, Love in B Minor. Doh.

Love in B Minor started as a novella, but Jen & Lucas’ story developed into something more. So, I’m happy to announce that ,y next full-length novel “Love in B Minor” will be released on March 15th, 2016. And it IS available for pre-order at a very very special price of $0.99 🙂 (instead of $3.99!) 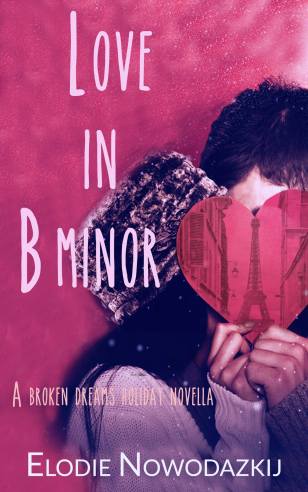 New city. New life. At least, that’s what nineteen-year-old Jen believes. On the surface, she’s living her dream: dancing in a prestigious dance company in Paris. But her sister’s death and the mistakes she’s tried to bury haunt her. She’s become a pro at hiding who she truly is, and she definitely doesn’t want a guy to derail her, but a one night-stand she can do. Nothing more. She definitely doesn’t plan to see the sexy stranger who made her laugh for the first time in years ever again.

I am so very excited about this book. Maybe, because Jen started talking to me as I was writing Always Second Best, or maybe because it’s set in Paris, or maybe because I may have developed a writer’s crush on Lucas 😛

If you’d like to read an exclusive excerpt of LOVE IN B MINOR, don’t hesitate to join my Readers’ group on Facebook: Elodie’s Cozy Nook.

Talk to you soon ❤

Today's prompt? GOALS ACCOMPLISHED. This was so fun to look back at everything I've accomplished since I first self-published in 2014. Some of these weren't goals I had but feel like it still. I didn't accomplish all of this alone. So thank you to everyone who's been supporting me and especially thank you to my husband, not only because he took care of selling my books at an event while I was at the hospital but for the encouraging words, the time spent brainstorming, the times where he pushes me, and just the time he makes me laugh. (I'll tell him at lunch time again how grateful I am to him but posting this without mentioning him wouldn't have shown how much support I am getting). Real talk: I did our taxes and last year I had a loss with my writing endeavors. Granted I had a "few" treatments throughout the year, biopsies, radiation and a stem cell. But...it still was/is hard on a personal level because I earned money with my writing in prior years. It doesn't take away from my accomplishments but it shows again that I'm able to do that thanks to the support my husband gives me. Yes. He's pretty great. . ✒Published 8 books (oh and a non-fiction I helped edit more than ten years ago). . ✒ Published those 8 books in many other languages, including in French. . ✒3 of those 8 books got picked up by a traditional publisher in France. . ✒Got to see my books in bookstores and libraries in France <3 . ✒ Received so many heartwarming readers' emails and messages including from teenagers all around the world. . ✒ My book FEAR ME, FEAR ME NOT was read by at least 2 book clubs! . ✒ Got featured in The Baltimore Sun - Got a review in The Guardian . ✒ Participated in many author events. Sat at the same table as authors I admire. . ✒Writers' retreat. . ✒ Readers made me fan art! . ✒I signed a guitar! . ✒ I narrated two of my books in French. . ✒ Several of my books in English and French are available as audiobooks... . ✒ Was able to use my platform (small platform but still :-)) to raise money for charities close to my heart in 2018 and 2019. . ✒ I got to write those stories and I get to write more. #AuthorLifeMonth #AuthorsOfIG #authorsofinstagram #writersofig